Connect directly with our singers in Jerusalem wherever you are in the world - and enjoy unique access, insights, perks, and inspiration. Yalla - let's spread some harmony together!

About the Jerusalem Youth Chorus

The Jerusalem Youth Chorus is a choral and dialogue program for Palestinian and Israeli youth in Jerusalem. Our mission is to provide a space for these young people from East and West Jerusalem to grow together in song and dialogue. Through the co-creation of music and the sharing of stories, we empower youth in Jerusalem with the responsibility to speak and sing their truths, as they become leaders in their communities and inspire singers and listeners around the world to work for peace, justice, inclusion, and equality.

The Jerusalem Youth Chorus is unique in its combination of music and dialogue programming, providing a transformative experience for our singers that yields both friendship and understanding on an individual and collective level across lines of religion, nationality, language, and culture. We go beyond simply singing together, delving deeper into one another’s identities, life experiences, communal narratives, religious traditions, and national histories through dialogue, all within the safe space of the musical ensemble and the strong personal bonds and community it creates. 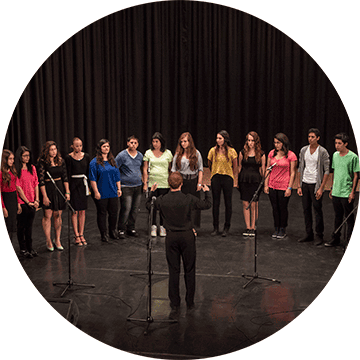 Musically, the Jerusalem Youth Chorus seeks to reflect the values of equality and inclusiveness upon which we are based, truly making manifest the concept of beauty in diversity. As our members come often from vastly different musical traditions, we draw heavy influences from both East and West in our repertoire and musical style. As such, we seek to innovate and challenge boundaries musically as we do in the non-musical elements of our program. To hear our unique sound for yourself, visit our music page.

The community built by the Jerusalem Youth Chorus is strong and full of love. We meet even through wars and cycles of violence because in some ways, the chorus is actually the place our singers feel safest being themselves, no matter what is going on outside. Our singers take the lessons they learn in JYC and share them widely, with friends, family, and classmates, inviting peers to see our rehearsals, parents to see our concerts, and sometimes even publicly challenging figures of authority to see things from a different perspective.

As a performing ensemble, we seek to amplify our impact even further through local and international performances and media coverage.

The Jerusalem Youth Chorus has been featured on the Late Show with Stephen Colbert, as well as in the New York Times, on the BBC and on PBS, in Haaretz, Alhurra, and more than 100 other news sources. We have recorded with multi-platinum Israeli artist and peace activist David Broza in Jerusalem and in London with Duran Duran. Our viral music video, Home, with YouTube superstar Sam Tsui, has amassed over 400,000 views. We have toured to Japan, the United Kingdom, the United States, and Switzerland and have performed at venues as celebrated as the United Nations in Geneva, the Kennedy Center in Washington, DC and as a featured ensemble at the Yale International Choral Festival.

Most importantly, we perform regularly in Jerusalem, joining forces with other organizations working for peace, justice, and equality, and also reaching out to those who have never even considered that something like what we do could even be possible, let alone beautiful.

Before contacting us to ask questions, please read our Press Kit.